Great Removers of History: Hannibal Crosses the Alps with Elephants 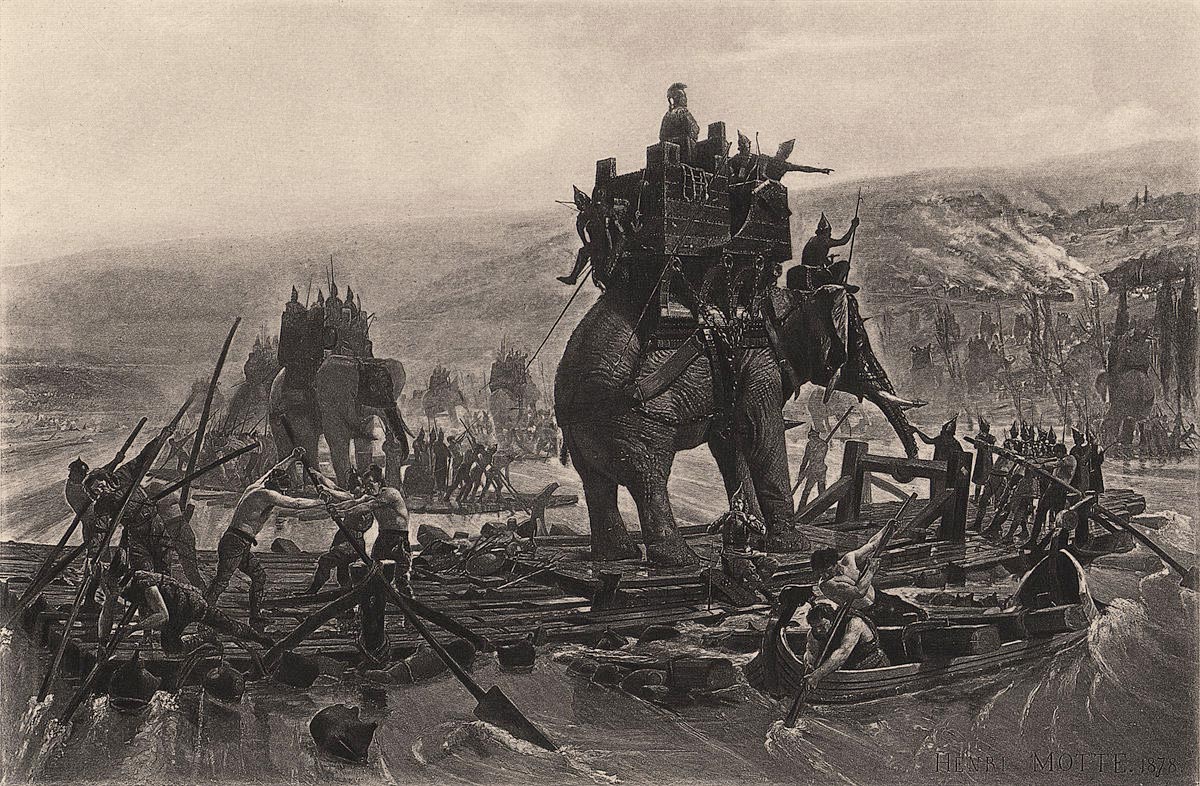 In the year 218 BC a young soldier named Hannibal Barca came up with a plan to destroy his hated enemies – the Romans – by leading a surprise invasion of Italy. The plan had only one drawback: it was completely nuts.

The Roman Republic (before it became the mighty Roman Empire) had for some years been engaged in a battle with Carthage, a city state located in what is now Tunisia and with territories extending across North Africa and southern Spain.

These wars – known as the First and Second Punic Wars –  would probably be virtually forgotten today, were it not for the extraordinary actions of the Carthaginian general Hannibal Barca.

Hannibal came to believe that the only way to win was to invade Italy and vanquish the Romans in their own lands. Since Rome had complete mastery of the Mediterranean Sea and a direct crossing was out of the question, Hannibal came up with a strategy to lead his army along the North African coast, all the way through modern-day Spain, across what is now southern France, and then launch a surprise land attack on Rome from the north. 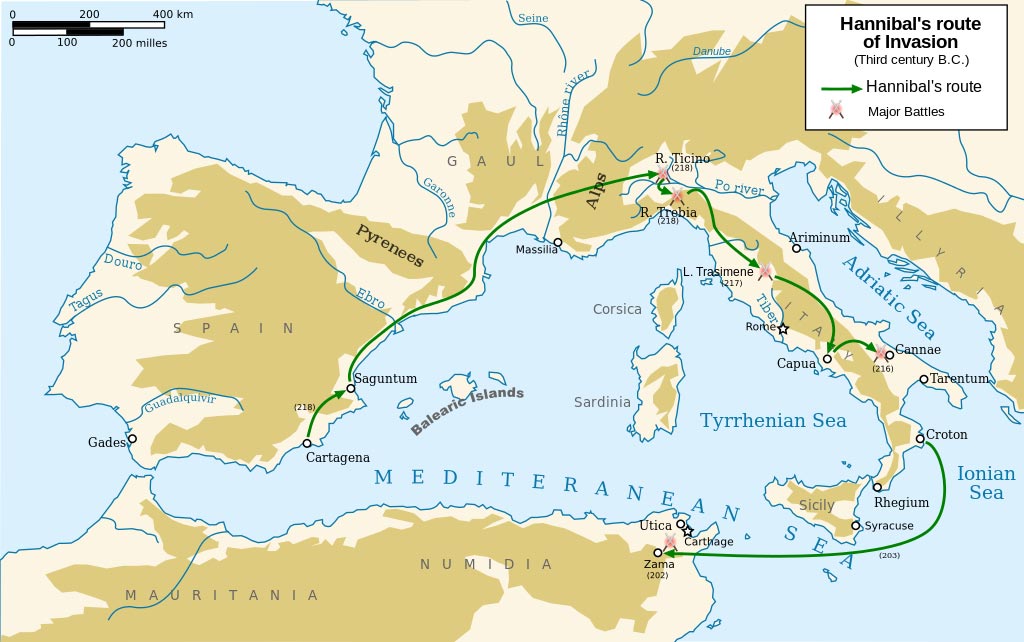 Transporting tens of thousands of cavalry and infantry, thousands of horses and a herd of 37 African battle-elephants across the formidable heights of the Alps would of course be impossible. But Hannibal would have to do at least four impossible things before he even got to the Alps.

Nonetheless, he did them. Which is why Hannibal is rightly revered as possibly the greatest removal man in the history of the world. He faced a logistical nightmare of gargantuan proportions, and he triumphed. This is how…

It’s no simple matter to get together a horde of 90,000 heavy infantry and 12,000 cavalry from a varied collection of African and Iberian nations, feed them, fund them and persuade them to accompany you on an impossible mission. Hannibal managed it by sacking the city of Sagantum (near modern-day Valencia), stealing its treasure, selling its inhabitants into slavery and using the proceeds to build his mega-army. He then gave everyone the winter off to build up morale.

Impossible feat 2: Marching through the Pyrenees

One can only imagine the difficulties merely in moving such a vast army – including the famous 37 elephants –  from any point A to point B with 218 BC methods of transport and communication. Hannibal had to take his army across Iberia and through the Pyrenees, defeating no fewer than four warlike tribes and conquering an unspecified number of cities on the way. The trek took two months and cost 13,000 of his men – and he’d barely got into France yet.

The next big obstacle was the wide, bridge-less river Rhone – at the other side of which waited a ferocious tribe of Roman-backed Gauls called the Volcae. Hannibal was now faced with floating all his men and beasts across the water straight into the jaws of a jeering, bloodthirsty enemy.

His solution has become a textbook example of military logistics. Borrowing boats, canoes and other materials from some handy nearby Celts, Hannibal made a big noisy show of building a flotilla of vessels on the eastern bank, as the Volcae watched on from the west.

Meanwhile under cover of darkness he secretly dispatched a column to travel 25 miles upriver and cross far to the north of the Volcae. These troops then snuck down the eastern bank and  – just as Hannibal began crossing with the main army – they descended on the horrified Vulcae’s rear and chopped them to bits, allowing Hannibal to disembark in perfect safety. (The operation had taken 5 days of planning but the battle was over in minutes. And it’s believed that nearly all the 37 elephants managed to swim the river.)

Impossible feat 4: Fighting virtually everybody with an ever-dwindling force

And still Hannibal hadn’t even made it to the Alps. Now he had to march another 80 or so miles across land swarming with hostile tribes before winter came to the mountains.

Hurrying along, he fended off a battalion of Romans, then got involved in a separate war that was going on between two tribes of Gauls. With typical cunning he used it to his advantage. He joined forces with the stronger tribe, helped them win and was repaid with supplies and diplomatic protection, which was enough to get his increasingly exhausted army to the foot of the Alps.

Over the years, various people have attempted to recreate Hannibal’s adventures by taking elephants from zoos and so on over the Alps. None have found it easy – and they didn’t have to contend with angry Barbarians armed with sharp bits of metal. Hannibal did, twice. The first lot were called the Allobroges. Hannibal made fake campfires to entice the Allobroges out of their fortifications, then slaughtered them with slings and arrows.

The next lot of Barbarians, called the Centrones, were trickier. They initially befriended Hannibal and offered to guide him across the mountains, but once they got to a narrow pass they sprung an ambush. But again, Hannibal was too smart. Suspecting the Centrones of duplicity, he put his strongest forces in the rearguard of the train, held back from entering the pass and forced the Barbarians to fight – and die –  in the valley. 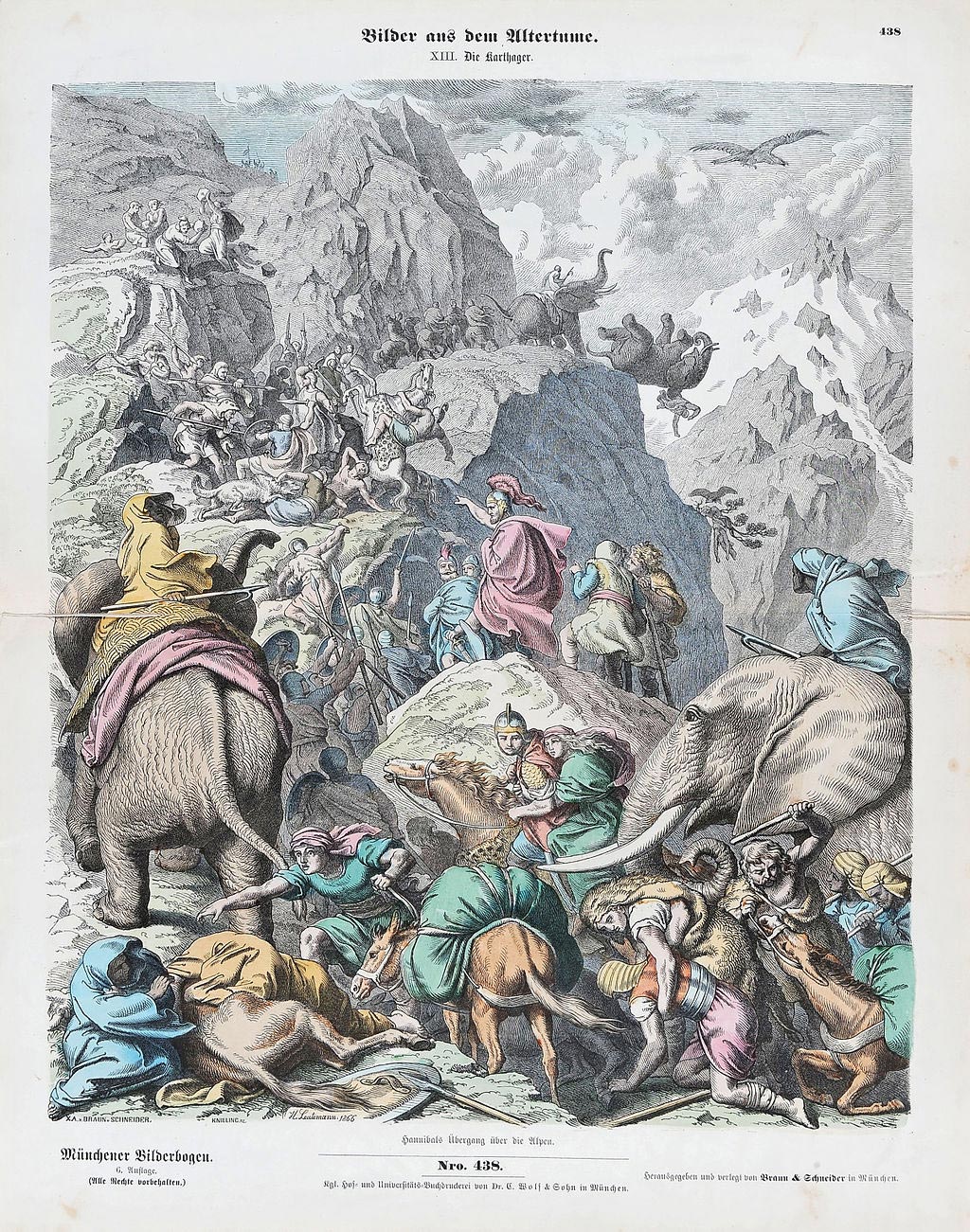 Impossible feat 6: Getting down the other side

The exact route Hannibal took through the Alps is still much-disputed by historians, even though it is of little real historical importance. But we do know that his army and baggage was by now much diminished, and his 25,000 or so remaining men, accustomed to the warm climes of Africa and the south, were not much enjoying the Alpine snows.

And the most demanding terrain was to come: the Italian side of the Alps is much steeper than the French, so the descent would be hellish. Once again (according to one account), Hannibal pulled a masterstroke: he gathered his weary troops and, showing them the spreading downlands of Italy and pointing towards Rome, he delivered one last rousing speech, giving them the inspiration they needed for the final push.

They would need it – the paths down the Alps were unsuited to mules, never mind elephants, and were devastated by landslides to boot. Several times the army had to stop and retrace its steps, or spend days rebuilding pathways.

But, after five months, a thousand miles, innumerable hardships and at the cost of some 68,000 men (and a lot of mules and elephants), Hannibal led his army down to the Po Valley and into Italy. Which leaves the question…

…Was it all worth it?

Probably not, in the long run. True, Hannibal established a base in Italy, won a succession of famous battles and successfully harassed and harried the Romans for 15 years. But he never managed to get to Rome itself, and in the end he was defeated, Carthage was razed to the ground and Hannibal died in his mid-60s, possibly after poisoning himself to avoid capture and humiliation by his enemies. And Rome, of course, became a mighty Empire.

But despite all that, when it comes to achieving an impossible logistical task with ingenuity, determination and calmness under pressure, there’s never been anyone to touch Hannibal Barca – the original Master Remover.

A marble bust found in Capua, reputedly of Hannibal.

What makes a Master Remover? Find out here…